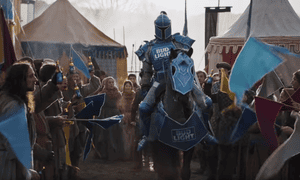 HBO doesn’t really need to promote Game of Thrones. It’s the world’s biggest television series, and this is the finale. It’s the grand culmination of an epic story the scale of which television has never before seen. Even if HBO’s promotional budget for Game of Thrones only ran to a single classified listing in a small town’s residential newsletter, you’d still know about it. We all would.

And yet HBO apparently has money to spare, because it’s lobbing it around at all sorts of dumb stunts. If you watched the Super Bowl this weekend, you will be familiar with the Bud Light commercial that doubled as a horrifying off-brand Game of Thrones series announcement. You will have watched the cheery olde-world jousting tournament end in a blaze of dragon fire shortly after the king’s champion was murdered by Gregor Clegane, and you will have thought, “Oh, is that canon? Did the Bud Light Bud Knight live in Westeros all along? Was George RR Martin saving his unveiling for A Promise of Spring? Does this mean I have to update my fandom wiki now?”

The advert wasn’t great, but it does have two things going for it. First, it bears the faintest trace of authenticity, since it was co-directed by Game of Thrones’ David Nutter and informed by the showrunners, who were apparently keen to nail the look of horror on one onlooker’s face as the Bud Knight’s skull was crushed. Second, it could have been much worse. The Wall Street Journal reported that Coca-Cola was one mooted partner for the advert, on the proviso that it could turn a polar bear into a White Walker.

According to the same report, the ad is part of a $20m promotional drive that will also include a scavenger hunt to locate several iron thrones hidden around the world, and a blood drive that comes with the motto “Would you bleed for the throne?”. Meanwhile in the UK, Now TV plans to fly over a tattooist to ink GoT-related imagery on to fans (and, if the press release is any indication, the country’s most desperate journalists). And the Game of Thrones Twitter account has also gone into overdrive this week, inserting itself into the high-profile squabble between Wendy’s and Burger King, and exchanging pleasantries with Mr Peanut in the vain hope that this will somehow translate to a modicum of buzz.

In a way, this is fine. We live in 2019, where we’re all waist-deep in viewing choices and shows have to resort to all manner of idiotic stunts just to cut through the noise. But this is Game of Thrones, for crying out loud. Everyone already knows what it is, and everyone refuses to shut up about it. Even when it isn’t on the air, people won’t stop talking about Game of Thrones. Even though there were no new episodes last year, it was still the most watched on-demand series on Comcast. On Reddit, it was discussed more than any show other than RuPaul’s Drag Race. It was one of the top 10 most-discussed shows on Twitter, even though Twitter generally has the attention span of a gnat.

Game of Thrones doesn’t need to resort to these flopsweat-soaked marketing ploys. It’s a sprawling epic drama about a war for survival that has lasted for thousands of years. Life and death hangs in the balance of every single scene, which doesn’t exactly lend itself tonally to increased brand interaction with cartoon peanuts.

If this was all designed as fan service, it would make more sense. Game of Thrones fans are so emphatic about their love of the show that they literally spent an hour watching a block of ice melt in 2017, so they’re bound to go nuts for the hunts and the blood and the tattoos. If this had been reframed as gratitude for loyal viewership through the years, then it would actually look quite sweet.

But it isn’t. The aim of all this is apparently to swell the number of Game of Thrones viewers, convincing even the hold-outs who have resisted it so far, in the hope that they will watch other HBO shows, fall in love with them and retain their subscriptions. But that seems like a stretch. It’s one thing to want more people to watch Ballers, but quite another to murder a beloved beer mascot to do it.